Coming out of the pandemic-induced lull in true German style, the Oktoberfest is back with a bang! The iconic beer festival, celebrated worldwide, has begun in Munich and the rest of the world will soon follow suit with a massive spread of delicacies and drinks.

What began as a festival to celebrate the marriage of the crown prince of Bavaria (who later became King Louis I) to Princess Therese von Sachsen-Hildburghausen on October 12, 1810, is now a global affair. It is said that the then King invited everyone in town, and the party took on such a grand avatar that natives requested him to hold celebrations each year.

The popularity in India

A two-week affair that begins on the second to last Saturday of September, Oktoberfest celebrations have been getting bigger and better, with eateries going the extra mile to recreate the German vibe through their offerings, be it in terms of beverages or food. “In India, any festival means lots of fun, good food and drinks. Oktoberfest has all these elements,” notes Ashish Singh, corporate chef, Dhansoo Café, Delhi.

At Rizq, Delhi, where Oktoberfest is being celebrated for the first time, the specially-curated menu includes beer battered fish , lager-marinated kofta along with beer special cocktails. Himanshu Rana, its co-founder, says “The spirit of Oktoberfest has spread through the world, and is now very popular in India owing to much travelled clientele, enthusiastic chefs and mixologists who are up for beer-soaked celebrations.”

Also gearing up to provide an authentic German experience is JW Marriott Mumbai, Juhu. “We are back with the most authentic Bavarian experience. Every year, the scale of Oktoberfest celebration amplifies,” shares Rohit Chadha, its executive sous chef. And that’s not all! Oktoberfest fervour was at its peak at the Bhartiya Mall in Bengaluru over the weekend.

Menus curated for these two weeks are inspired by the dishes and drinks prepared in Germany. Singh says, “Germans are the pioneers in sausages, so we have made an exclusive menu celebrating the sausages of India. We have worked on recipes that suit the Indian palate. Some of the dishes on the menu are Goan Chorizo Paella, Goan Spiced Grilled Chorizo, Chorizo Chilli Fry, Chicken Sausage Fries, Ghee Roasted Chicken Sausage, Dry Pork Blood Sausage, Sliced Blood Sausage and much more.”

Facts about the festival

Oktoberfest is known for its outdoor celebrations. The mayor of Munich taps the first keg to open the festival inside the oldest beer tent, Schottenamel, and says, O’zapft is! or, it is tapped!. This signals the beginning of drought pouring throughout the fair.

Total beer consumption during Oktoberfest is estimated to be about 2 million gallons.

One of the rituals without which no Oktoberfest is ever complete is Chicken Dance, which originated at Tulsa, USA.

Horse riding is the centuries old tradition associated with this celebration.

Beer halls at the festivals were introduced in the 20th century to recognize German breweries which abide by ‘reinheitsgebot’ (Germany’s ‘beer purity law’ which states beer should consist of 4 ingredients – water, hops, malt and yeast). 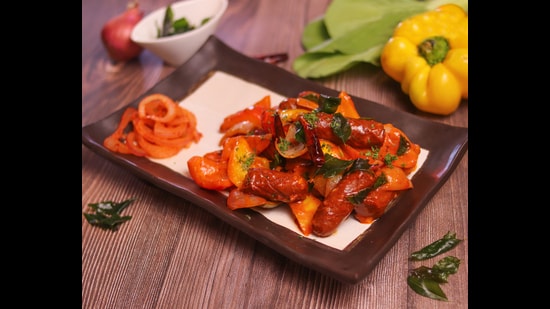